Krill are tiny marine crustaceans that are eaten by fish and whales. These are typically found in the Antarctic and North Pacific oceans. Krill represents the most abundant biomass of any living organism available in the world accounting for about 500 million tons. Krill oil has a unique combination of Omega-3 fatty acids, Astaxanthin, and Phospholipids.

That is, Krill is a great source of “Omega-3s (EPA and DHA)” as well as an antioxidant “Astaxanthin.”

Krill oil is more bio-available (better absorbed by the human body) than regular fish oils due to the co-existing Phospholipids, according to several studies. Thus, a smaller dose of krill oil can be as potent as a higher dose of regular fish oil.

So, the size of Swisse Wild Krill Oil Softgel is very tiny compared to regular fish oil softgels, a big plus especially for people who can’t swallow big pills. Also, krill oil doesn’t cause fishy burp, another great plus! 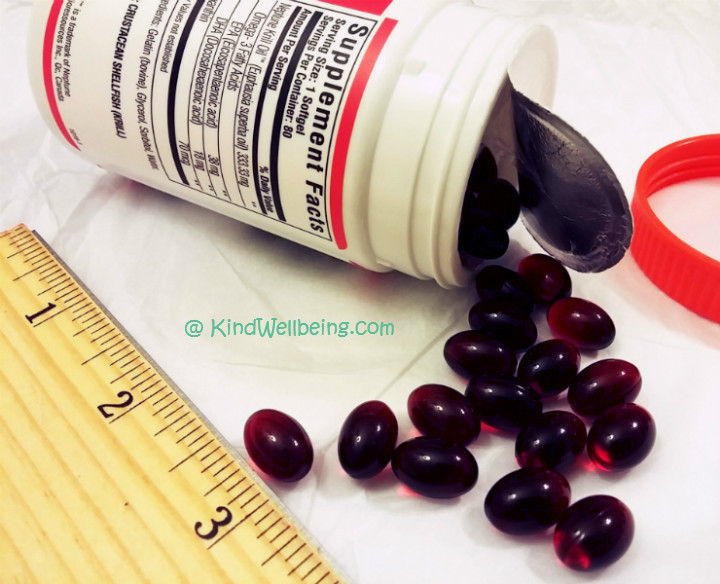 When it comes to the quality (or the brand) of the krill oil, I would trust the krill oils from either Neptune Technologies and Bioressources (NKO® Neptune Krill Oil) or Aker Biomarine (SuperbaTM) the most as the ingredient suppliers. They are like Coca-Cola and Pepsi in that they are the two most famous Krill oil brands, though it is not a good analogy (nutritious supplement vs. sugary drinks 🙂 ). Neptune Technologies is the frontier who holds the most patents, while Aker Biomarine appears to be more successful in marketing. Swisse Wild Krill Oil is made with Neptune Krill Oil, so pretty reliable in terms of the ingredient quality.

Other ingredients besides Krill oil and Astaxanthin are the components of softgel capsules, which are a mix of gelatin, a couple plasticizers, water, and a flavoring agent. Pretty simple!

The only downside that I found is that it smells like shrimps, when the bottle is open. Although I love shrimps so much, I can’t enjoy the smell at all. I got this product as a sample bottle from the company booth at Natural Products Expo West 2014 that was held in Anaheim, CA in March (See the picture below for a glimpse. Swisse, Australia’s No. 1 multivitamin brand, had a great exhibition!). Anyway, I am uncertain if the products sold at local drug stores also smell the same. But I saw another review saying it smells like fish in another website, so the smell is probably a real deal, not just an exception to my bottle. 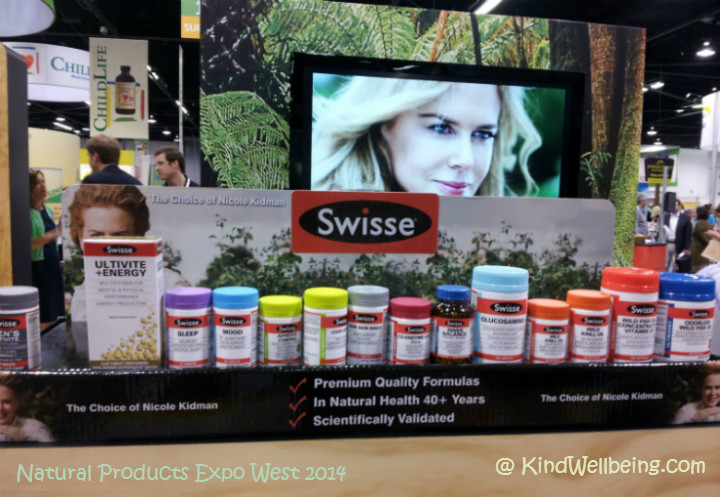 Lastly, it is worth mentioning that there have been concerns about sustainability since Krill are an important source of food for marine animals, including penguins, seals, and whales, in the Antarctic, such as the ban by the Whole Foods store in May 2010. But, the manufacturers argue that their krill oil has been sustainably sourced, below the sustainable catch levels for krill. You can find more information on krill oil from the websites of Neptune Technologies and Bioressources Inc. or Swisse.

Overall, krill oil is a great alternative for people who want to take fish oil but just can’t tolerate it. Swisse Wild Krill Oil seems to be a good product with quality ingredients, and I have no doubts about the health benefits of taking Omega-3s. I would not ban Krill oils for the sake of the sustainability debate, but rather choose other Omega-3s products, if possible, because I don’t like the smell of the Krill oil and I have no problem swallowing a little bigger pills. In fact, I personally prefer high dose extra-strength omega-3s pills. 🙂 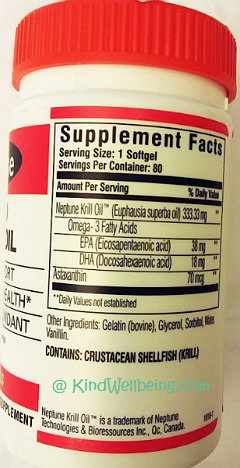 (1) Gelatin (Bovine) – a component of the shells of capsules; derived from collagen that is extracted from cattle skin and/or bones

(4) Water – an ingredient for soft gel capsules along with Gelatin, Glycerol, and Sorbitol

Claims by Swisse, the Manufacturer

A little bit of Omega-3s Background

It is widely known and accepted, based on tons of scientific research, that Omega-3 has benefits in terms of cardiovascular disease, inflammation, developmental disorders, psychiatric disorders and cognitive aging.

EPA and DHA are long-chain Omega-3 fatty acids that are primarily derived from marine sources such as fish and they have well-established health benefits including lowering of triglyceride levels and reducing the risk of arrhythmia.

ALA, a short-chain Omega-3 fatty acid, however, needs to be converted into EPA and DHA in the body for the health benefits.

It has been observed that the conversion of ALA into the more useful longer-chain DHA and EPA in the body is not that efficient, specifically among the aged people. Hence, EPA and DHA have a superior bioavailability as compared to other alternatives. Most common sources of DHA and EPA are oily fish such as tuna, salmon, sardines, mackerel, and swordfish and seaweed. Algae oil is a source of concentrated DHA that are extensively used in infant formulas. ALA is found in many plant sources such as flaxseed, chia, hemp seed, canola, legumes, and green leafy vegetables, though flaxseed and chia are the richest plant sources of ALA.

What do you think about Swisse Wild Krill Oil? If you have tried this product, please rate the product below and share your experience.